The EQUAL-SALARY is pleased to announce that, having reached all the requirements of the EQUAL-SALARY procedure, ECA (Établissement d’assurance contre l’incendie et les éléments naturels du Canton de Vaud) has renewed the EQUAL-SALARY certification for the 3rd time in a row.

Present since 2011 in the group of EQUAL-SALARY certified organizations, ECA stays true to its image of pioneering and outstandingly equal company, passing successfully the various steps of the certification.

« I am particularly proud of ECA’s involvement. It was one of the first organization trusting our Foundation. The fact that ECA renews its certification for the third time is to me a proof – if still needed – that this commitment to equal pay is valuable” commented Véronique Goy Veenhuys, Founder and CEO of the EQUAL-SALARY Foundation.

“As a public service provider, ECA must set itself as an example. The renewal of our EQUAL-SALARY certification values ECA as an attractive and accountable employer on the labour market. (…) Today, it is no longer conceivable to have differences in treatment for a same role in a company” added Serge Depallens, Managing director of ECA.

While most companies claim to pay women and men fairly, the wage gap is still close to 23% globally, averaging 16.2% in Europe. In Switzerland, in the sector of finance and insurances, the gap still reaches 31%. (sources: eurostat June 2018, based on 2016 data / Federal office of statistics).

… and particulary in the public sector of the Canton de Vaud

According to the swiss investigation on the wages’ structure (OFS 2016) the wage gap between women and men working in the public sector reaches 9.6%. 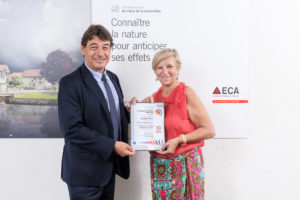 Reflections on the occasion of 50 years of women’s suffrage in Switzerland by Véronique Goy Veenhuys for the Global Compact Network Switzerland. Read article here.

The EQUAL-SALARY Foundation is pleased to announce that UBS has obtained the EQUAL-SALARY certification, symbol of excellence in terms of equal pay, for all its employees in Hong Kong, Singapore,…

The impact of Covid-19 brought gender equality issues to the forefront during 2020, with lots of discussion and concerns raised around unequal male and female roles and pay. Inequalities that…

Donate
Our site uses cookies to improve your experience on our site. Cookies enable you to enjoy certain features and they also help us understand how our site is being used. Find out more and set your cookies preferences here. By continuing to use our site, you consent to the use of our cookies. Read our privacy notice.
J’ACCEPTE Reject
Privacy Policy

This website uses cookies to improve your experience while you navigate through the website. Out of these, the cookies that are categorized as necessary are stored on your browser as they are essential for the working of basic functionalities of the website. We also use third-party cookies that help us analyze and understand how you use this website. These cookies will be stored in your browser only with your consent. You also have the option to opt-out of these cookies. But opting out of some of these cookies may affect your browsing experience.
Necessary Always Enabled

Any cookies that may not be particularly necessary for the website to function and is used specifically to collect user personal data via analytics, ads, other embedded contents are termed as non-necessary cookies. It is mandatory to procure user consent prior to running these cookies on your website.